X
This site uses cookies to provide and improve your shopping experience. If you want to benefit from this improved service, please opt-in.
More Info
Accept Cookies
Menu 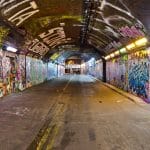 The History of Graffiti – Graffiti Comes to the UK

Graffiti Comes to the UK

Of course, it didn’t take long for graffiti to migrate to the UK. In the late 1980s hip hop and electro music started to gain popularity, and with it came street art. By the 1990s spray paint was custom made, allowing writers to make their mark with even more elaborate art. One of the UK’s early crews was known as DryBreadZ Crew, and the most famous graffiti writers of all time, Banksy, started out as a member of the crew.

Not only was spray paint more ‘graffiti friendly’, but so were other materials which allowed writers to get their work up as fast as possible. Stencils and stickers came into play, meaning that artists could get in and get out without being caught by the police.

Although Martinez paved the way for many graffiti writers and artists to be taken seriously, it wasn’t until the 2000s that it really came to be seen as a credible form of art. Suddenly art collectors wanted street artists to do commissioned pieces for them, and graffiti became a legitimate means of earning money. Many artists dropped their tags and began creating art in their real names in order to build professional reputations.

The internet has, for the most part, done away with the anonymity of street artists, and young people are building a career out of what was once considered a scourge.

Thanks to LoveMyVouchers.co.uk for taking us through this brief history of graffiti. It is refreshing that Graffiti is now seen as an acceptable form of art, and with pieces being commissioned rather than thrown up in a hurry, it is evolving into something pretty spectacular.

For more information about graffiti, its history, current graffiti artists, and the latest news, visit the Media section of the site.